Chinese companies are buying up land in Asia and Africa. The combined area of land purchased or leased by such companies over the past decade is equal to the total land area of Sri Lanka or Lithuania and much larger than acquisitions by their counterparts in the U.S. and other major countries.

Concerns are growing that emerging and developing countries, as sources of supply for food and natural resources, will fall under China’s sway. The security implications are worrying as well.

Japan and other large countries cannot brush aside this Chinese buying spree as insignificant.

“Regulations should be further tightened to prevent the uncontrolled corralling of land,” said Hideki Hirano, a professor at Himeji University who studies foreign investors’ land acquisitions. To give just one example, bananas are extensively cultivated in the northern Myanmar state of Kachin. Banana trees standing some 3 meters tall grow thick and throw deep shadows in plantation areas. The development of plantations began to accelerate around 2015 and has drastically changed the landscape.

Chinese companies are heavily involved in banana cultivation in the area, according to surveys by nongovernmental and other organizations. Banana exports from Myanmar soared 250 times from $1.5 million in 2013 to $370 million in 2020, according to data from the United Nations. Most of the produce goes to China.

Banana plantations have continued to operate in Kachin since the military coup in February, local residents say, because they are an important source of tax revenue for the Myanmar armed forces.

Chinese businesses are altering the landscape of many places beyond Myanmar. In the southern Vietnamese province of Binh Phuoc, natural rubber production is an important industry. But that industry is now under threat due to the activities of New Hope Liuhe, a leading Chinese livestock company, which is raising a huge herd of pigs on a 75-hectare plot of land developed in 2019. New Hope has expanded in central and northern Vietnam as well, using its year-old pig farm in Binh Phuoc as a model. 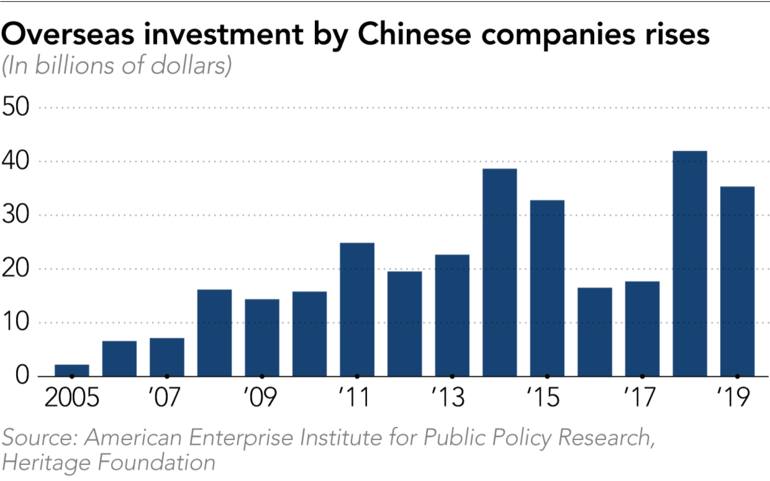 The Democratic Republic of the Congo offers an illustration: Most of the land in the central African country, is forested. Amid soaring timber prices, a Chinese company, Wan Peng, has been shipping large quantities of timber from the country to China. The Congolese Embassy in Tokyo declined to comment on the contract with the Chinese company.

Chinese companies are also buying mines. China Minmetals invested $280 million in Tanzania, in southern Africa, in 2019, and China Non-Ferrous Metal Mining poured $730 million into a mining operation in Guinea in 2020, according the American Enterprise Institute for Public Policy Research, a think tank. The investments were reportedly aimed at gaining access to minerals for use in, among other things, batteries for electric vehicles.

Countries that accept Chinese investment are exposed to potential risks as they become more reliant on China. Beijing’s Belt and Road Initiative, a huge multinational infrastructure development program, is a debt trap scheme, say experts. Host nations become heavily indebted to China in an effort to spur development and are later are unable to escape its control.

When CHEC developed a port in southern Sri Lanka, the country was unable to repay loans to China and handed over the port to CHEC on a 99-year lease — a typical example of the debt trap.

In May, China Harbor Engineering (CHEC) won an order to build an expressway in Colombo, Sri Lanka’s largest city. The Chinese company will continue to own the highway after its completion, handing it over to Sri Lanka’s control only after collecting tolls for 18 years. Criticism is also simmering about the murky bidding process for the highway order in Colombo.

Chinese moves to snap up assets abroad are generating countermeasures around the world.

In June, Japan’s parliament enacted a new law to tighten regulations on the acquisition and use of land in places deemed vital to national security. The law, aimed at China, is designed to prevent questionable land deals by foreign businesses. There are already cases of foreign entities owning land near the Japan Air Self-Defense Force’s base in Chitose, Hokkaido, for example.

Other types of land, such as general-use forests, have yet to be covered by such regulations. Foreign entities have acquired 46 hectares of farmland and 7,560 hectares of woodland, according to the Ministry of Agriculture, Forestry and Fisheries.

In addition, “there are cases of land owned nominally by Japanese citizens, but which are backed by Chinese entities,” said a person connected to the Public Security Intelligence Agency.