Instead, with China’s widening regulatory crackdown, the shift toward tech now threatens to bring the Hang Seng Index into bear market territory.

A 30% hike in Hong Kong’s stock trading transaction tax, due to kick in when the market opens Monday, is only adding to the gloom, alongside tightening U.S. regulations on investing in Chinese companies.

“The pivot towards technology stocks was an opportunistic move by the index compiler,” said Hao Hong, head of research at BOCOM International in Hong Kong. “The hope was that the inclusion of fast-growing names would help the Hang Seng Index breakthrough. Now nothing can be done but wait it out for regulatory certainty.”

The Hang Seng has fallen 17% since peaking in February at 25,908, edging toward the 20% decline defining a bear market. About $170 billion of market value was wiped off the index between July 22 and July 27, as Chinese authorities announced a flurry of measures hitting companies including Tencent Holdings and Meituan.

Hang Seng Indexes, a subsidiary of HSBC Holdings’ Hang Seng Bank, added Meituan, Alibaba Group Holding, Xiaomi and WuXi Biologics (Cayman) to its benchmark in a series of moves over the past year that expanded the index to 58 stocks from 50 and reduced its emphasis on the financial sector. 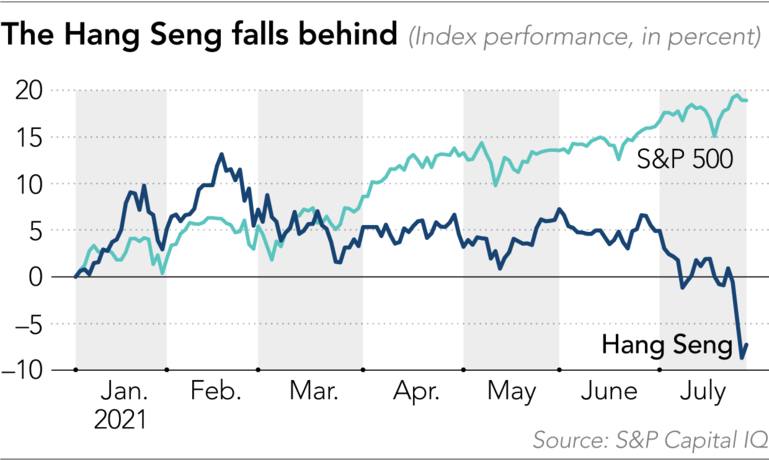 Tech’s weighting in the Hang Seng has doubled to 27% since 2019 and is set to rise further to 29% as the index grows to 80 stocks next year.

The benchmark, which had the best start to the year among major indexes, has lost 5.5% so far in 2021 and lags the S&P 500 and Nikkei Stock Average. The Hang Seng has lost 6.5% just since July 22, the day before a leaked Chinese government announcement signaled the start of a crackdown on private education companies.

With China’s Ministry of Industry and Information Technology launching a six-month rectification program for internet companies, few see sentiment turning anytime soon. On Friday, Beijing summoned 12 major Chinese technology companies, including Alibaba and Tencent, to warn them about the need for further improvements in data security.

“The risk perception for China is rising,” said Sim Moh Siong, a strategist at Bank of Singapore. “Investors are asking which sector will be next following the regulatory crackdown on for-profit education and tutoring institutions.”

While the Hang Seng does not include any Chinese education companies, their troubles have shaken the wider market. New Oriental Education & Technology Group, one of the biggest private tutoring players, fell 67% between July 22 and the month’s end while China Beststudy Education Group dropped 60% and Scholar Education Group 48%.

That edict has come alongside new labor rules for food-delivery companies like Meituan, a fine and a ban on exclusive licensing deals for Tencent’s music streaming unit and talk of tighter restrictions on online finance platforms.

Since last November, the clampdown on internet platforms has included the halting of Ant Group’s $35 billion initial public offering, an 18 billion yuan ($2.78 billion) fine for Alibaba and more recently, a bar on Didi Global signing up new customers combined with new restrictions on overseas listings. Pierre Lau, managing director with Citigroup’s equity research group in Hong Kong, said that internet stocks will “only have upside when there is regulatory clarity,” recommending instead that investors buy into companies with less regulatory risk, such as state-owned enterprises and clean energy sector stocks, as well as those which could gain from a post-COVID bounce, such as insurer AIA and airlines.

The Hang Seng Tech Index, launched a year ago to give investors focused exposure to leading Chinese tech companies, is the worst performing technology benchmark globally. The gauge has dropped 17.4% this year compared to a gain of 17% for both the MSCI World Information Technology Index and Nasdaq-100 Index.

Hong Kong’s new tech gauge has fared poorly against the Hang Seng HK 35, which tracks the largest Hong Kong-listed companies that generate a majority of their rev
enue outside mainland China. The non-China shares have outperformed the China techs by 29% so far this year.

The biggest backers of the tech stocks, mainland-based investors, turned into sellers last month, disposing of a net $5.4 billion in Hong Kong shares through the Stock Connect program that connects the city’s exchange with peers in Shanghai and Shenzhen.

The selling came ahead of an increase in the transaction tax Hong Kong levies on stock trades, known as the stamp duty. Hong Kong is alone among the world’s largest stock-trading centers in imposing such a levy, though unlike the U.S. and Japan, the city does not tax capital gains or dividends.

Meanwhile, under an executive order issued by U.S. President Joe Biden in June, American investors as of Monday will be barred from buying securities of 59 companies now labeled as “Chinese military-industrial complex companies.” 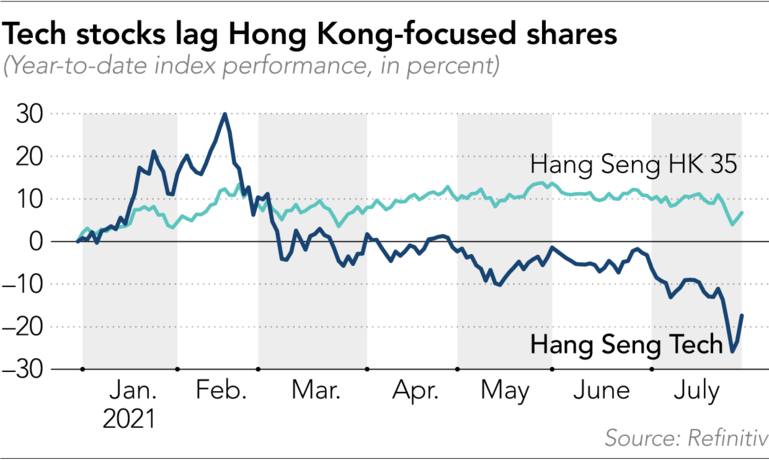 The directive covers a number of state-owned companies listed in Hong Kong, including Semiconductor Manufacturing International Corp., CNOOC, China Telecom, China Mobile, China Unicom (Hong Kong) and China Communications Construction Group. Most of these companies were previously listed in New York as well, but have already been delisted from U.S. exchanges.

American investors will have a year to divest any holdings in blacklisted companies.

Damage-control signaling by Chinese authorities late last week to reduce contagion to the wider stock market from the internet and education sectors had some impact.

“The recent market decline to some extent reflects misinterpretation of policies and a venting of emotion,” said the state-run Securities Times in a front-page commentary last Wednesday. “Economic fundamentals have not changed and the market will stabilize at any moment.”

“In some instances, market fears appear to be an overreaction,” said Morningstar senior analyst Chelsey Tam in a note also issued on Wednesday.

She added that her estimates of the fair value of Chinese internet stocks had not changed “as fundamentals are intact and a severe clampdown and material fair value destruction is unlikely at this stage, given the government’s support of the platform economy and the strategic importance of the sector.”

Yet she concluded, “We believe investors could stay away from the sector until regulation risk subsides.”